require.resolve(‘myModel’): this behaves exactly the same as require, but does not load the file. It will still throw an error if the file does not exist. This can be use for check an package is installed or not.

Marie invented a Time Machine and wants to test it by time-traveling to visit Russia on the Day of the Day of the Programmer (the 256th day of the year) during a year in the inclusive range from 1700 to 2700.

Maria plays n games of college basketball in a season. Because she wants to go pro, she tracks her points scored per game sequentially in an array defined as score = [S0,S1,…,Sn-1] . After each game i , she checks to see if score Si breaks her record for most or least points scored so far during that season.

Given Maria’s array of scores for a season of n games, find and print the number of times she breaks her record for most and least points scored during the season.

Note: Assume her records for most and least points at the start of the season are the number of points scored during the first game of the season.

The first line contains an integer denoting (the number of games).
The second line contains space-separated integers describing the respective values of .

Given  and , find and print the number of integers (i.e., possible ‘s) that are between the two sets.

Print the number of integers that are considered to be between  and .

Sam is a professor at the university and likes to round each student’s  according to these rules:

For example,  will be rounded to  but  will not be rounded because the rounding would result in a number that is less than .

Given the initial value of  for each of Sam’s  students, write code to automate the rounding process. For each , round it according to the rules above and print the result on a new line.

For each  of the  grades, print the rounded grade on a new line.

Each integer is in the inclusive range .

Print two space-separated long integers denoting the respective minimum and maximum values that can be calculated by summing exactly four of the five integers. (The output can be greater than 32 bit integer.) 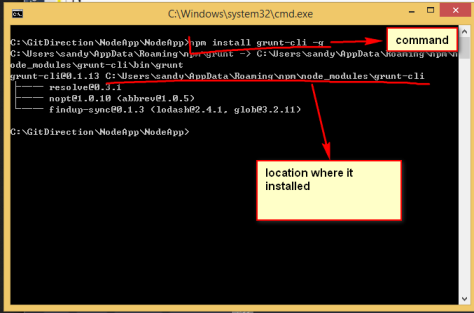 For node.js website run also need run npm install grunt-nodemon -save-dev (-save mean will add a reference to the package.json file, -dev means this only for developer )

then go to the project root level create a file name: gruntfile.js

once this has been done, then go the command run grunt;

Now it is time to add clents size recource file into your specify folders, in my project I create a public folder to hold all the css and js,

In node.js there are a plug called bower will install the client packages for you.

1) In the root director create a file named .bowerrc and put an object inside the file:{“directory” : “public/lib”} this is to tell bower where you like to put your client sie resource

2)the bower need git working with it, make sure your git install at globle level.

Since bootstrap is commonly used in a lot website and I am also very confident withe working with bootstrap. now it’s time using bower to install bootstrap

After that then just put the css and js file into the layout.vash 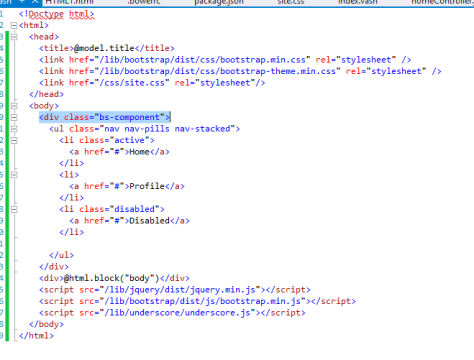 You could write all your code inside the sever.js file, but this is not looking very nice and the node.js supports your to write very function to modules that will be easy maintain and to test it.

Especially in this day, we need write anything in MVC architecture way. Now we are going to creates a foleder named controllers in your project so here is the folder looks like.

now you have very nice and clear code in serve.js 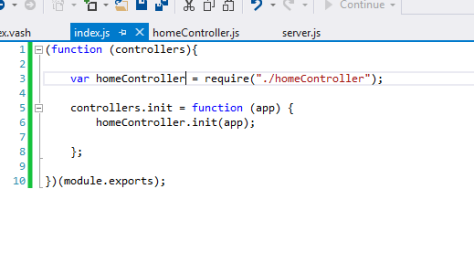 here is your homeController.js file, get,post,delete,… wirte in this file

the last step is write your view, here is the layout.vash and index.vash 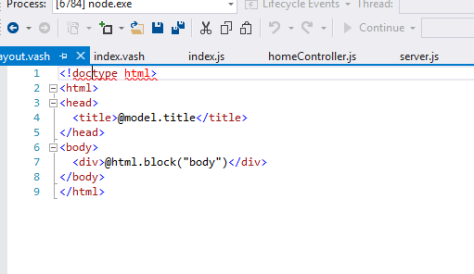 Then finally, go to local host will render page: